Technical Details on My Harp

Built with Pictish, Ancient Egyptian and modern audio-mechanic influences with four octaves, this harp really does have a unique sound.

Old stone carvings in Northern Scotland as well as littered throughout the British Isles depict a harp with a straight neck. This was termed the “Pictish” harp, due to the lack of a harmonic curve in the neck. The harmonic curve came later when the artsy folks of the British Isles discovered that you could use metal wire for strings. With that came more tension of the likes that the straight necked harp could not withstand. 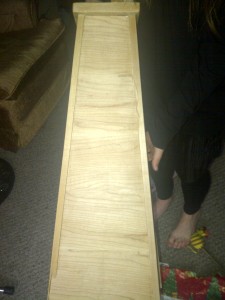 Ancient Egyptians had a type of harp called the “bow harp”. This was because the harp didn’t have a pillar supporting the neck. Crafted out of stiff woods with a hide covered, wooden ribbed, soundbox, these harps had amazing projection, harmonization and a different tone to them than even the Babylonian angle harp, a contemporary harp of the same time period did not have. Unlike most European harps, these bow harps didn’t have any holes in the back of the soundbox, but rather a singular opening at the end and bottom of the soundbox. 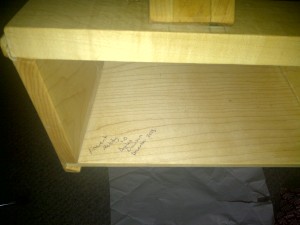 Modern audio-mechanics state that angles affect how soundwaves bounce around a given area. Ninety degree hollow areas trap bass soundwaves and allow the higher frequencies to move around resulting in a slightly tinny or really tinny, depending on the area, sound.

By ensuring that all of the angles in a given area in which sound travels to be open allows a fuller sound to be heard. Instead of just the mids and treble, you also get the lower mids and the bass frequencies. 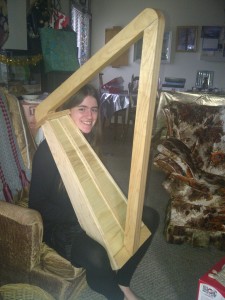 My harp has the Pictish neck and made with a ninety degree free soundbox with no holes in the back and a singular one at the end of the soundbox. 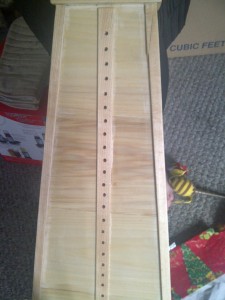 This harp is also made solid wood, laminated for width in some areas and shape of the harp in others. Maple makes up the body and poplar the soundboard. As it is made of solid wood, it vibrates with the sound and resonates with the sound frequencies differently than most modern harps as they are made with plywood and a veneer of the wood type of your choice. It is said that different woods in harps effect the sound in different ways, so it is unknown as to just how much having poplar instead of spruce affects the sound. I’ll let you woodworkers and sound enthusiasts figure it out.

How the Harp was Made:

It was made very creatively. About a month of research, searching through the net, drawings, planning, finding a workshop, arguing over procedures, headaches and yet more drawings. Another month was of actually making it- in my old high school woodshop no less. This was were things got a bit tricky and not just because of having to work around the students.

First up was the cutting of the wood. I wound up with a few extra pieces that got put to good use and in recreating the soundboard. After cutting the wood, there was making sure that all the pieces would fit together and actually make a harp. 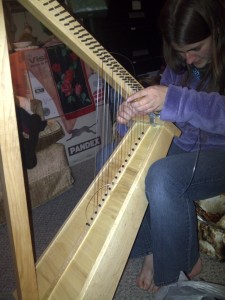 Upon gluing everything up, the harp frame and soundbox was made. It was sanded on the last day school was in session before Christmas holidays no less, during which I wouldn’t have been able to work on it. An umbrella was used to ward off the snow and it was finished on the deck with linseed oil.

One custom set of strings later, and it took another month to let them settle and the harp has been getting a more dynamic sound as time goes on.

This site uses Akismet to reduce spam. Learn how your comment data is processed.